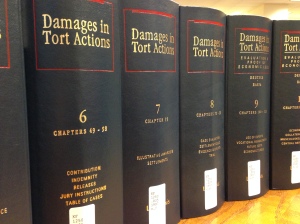 The law is constantly evolving as legislatures pass new laws and courts decide new cases.  As a result, the resources available at the law library must be constantly updated to reflect these changes to the law. Updating the library’s resources is an interesting and eye-opening task for someone like me, who is new to law libraries and the law.  And while these updates are usually commonplace and nothing extraordinary, every so often, the chapter headings verge on the edge of humor or something a little more sinister. At the very least, the chapter titles are rather conducive to dark jokes and a running commentary.

Damages in Tort Actions, an eleven-volume reference set available in the library, started off as expected with a generic chapter entitled “Damages in General.” Nothing seemed unusual or strange in the title – it fit rather well with the title of the volume. But things took a drastic dramatic turn  chapter four, “Pain and Suffering,”chapter seven: “Mishandling of Dead Bodies.”  Does this happen often enough to merit an entire chapter?  To make matters worse, chapter eight is the “Loss of Enjoyment of Life.”  Was an existential crisis looming?

These blunt headings were merely the beginning of the narrative unfolding before me, and I began to read the chapter titles as the outline of thriller novel with a dose of dark humor. Is this truly a reference set?  Instead, perhaps it is the tragedy of an over-worked attorney or the narrative of a disgruntled student. Whoever the story may follow, he or she is not a happy individual.

The thriller novel chapter headings continued throughout the update of Damages in Tort Actions. Chapter twenty-one: “Survival Actions” and chapter twenty-seven: “Loss of a Chance of Survival”  seem to foreshadow a rather gruesome and unhappy conclusion to this possible murder mystery. This reference set calls to mind what might happen if Edgar Allan Poe and John Grisham had decided to enter into the legal reference market.

Damages in Tort Actions may have been mistitled. A better name for it may be The Plight of the Human Existence or, perhaps, It Only Gets Worse from Here.

For more interesting, humorous, or odd laws come into the Law Library and look around!