New Maryland laws take effect on October 1, 2018! Over the summer we published  posts highlighting a few of the newly enacted laws:

This is just a small sampling of the new laws enacted by the 2018 Legislative Session. The Department of Legislative Services (DLS) of the General Assembly of Maryland provides a full listing. Was there a major issue from the 2018 session that was not covered in this series? The 90 Day Report – A Review of the 2018 Session, published by DLS, includes a hyperlinked list of Major Issues from 2018 such as the budget, education, public safety, taxes and voting rights.

Can’t find what you’re looking for?  DLS publishes a Popular Terms List as a reference for current legislation that is often referred to by the public and media by certain popular terms.

Do you prefer paper sources?  The Law Library’s collection includes the following resources:  the advance (paperback) Laws of Maryland, arranged in chapter number order with separate volumes for a Sponsor Index, the Final Status Report, and Committee Index; West’s Maryland Legislative Service with a list of sections affected; and  the 2018 Maryland Legislative Review Service, published by LexisNexis, which summarizes the 2018 Acts of the Maryland General Assembly Regular Session and organizes the 2018 Acts by topical headings. In addition, the Law Library’s Maryland collection includes print copies of the current Annotated Code of Maryland. The  2018 pocket parts should be coming soon.

Don’t forget – the Law Library is here if you have questions or would like additional information. Contact us!

Chapter 515 of 2016, also known as the Justice Reinvestment Act, authorized the expungement of convictions for several specified offenses, the vast majority of which are misdemeanors. Expungements of these convictions are subject to specified procedures and waiting periods. Senate Bill 101 (passed) authorizes the expungement of a felony conviction for theft, possession with intent to distribute a controlled dangerous substance, and burglary. The bill specifies that a petition for expungement of a felony is subject to a waiting period of 15 years from when the person satisfies the sentence or sentences imposed for all convictions for which expungement is requested, including parole, probation, or mandatory supervision. For a further discussion of Senate Bill 101, see the subparts “Criminal Law” and “Public Safety” within this part of this 90 Day Report.

These changes will go into effect October 1, 2018.

The Anne Arundel County Pro Bono Celebration ended with the county’s Annual Homeless Resource Day on October 28, 2017 where those who are homeless or in danger of becoming homeless can access benefits, medical care, substance use resources and mental health counseling as well as a variety of social services which can ultimately lead to housing and self-sufficiency.  This year 384 guests were served with an array of service provided by 61 different organizations

The pro bono attorneys were Ginina Stevenson, Myriem Seabron, Eric Crowder, Nickola Sybblis, and Patrice Clark of Iliff, Meredith, Wildberger & Brennan.  Jonathan Church of the Office the State’s Attorney was also on hand to help wherever needed.  And again this year, there was a large contingent of attorneys from the Annapolis Office of Legal Aid: Margaret Leonard, Amy Seigel, Kathleen Hughes, Anita Bailey and Lisa Sarro with Tammy Watts, paralegal. 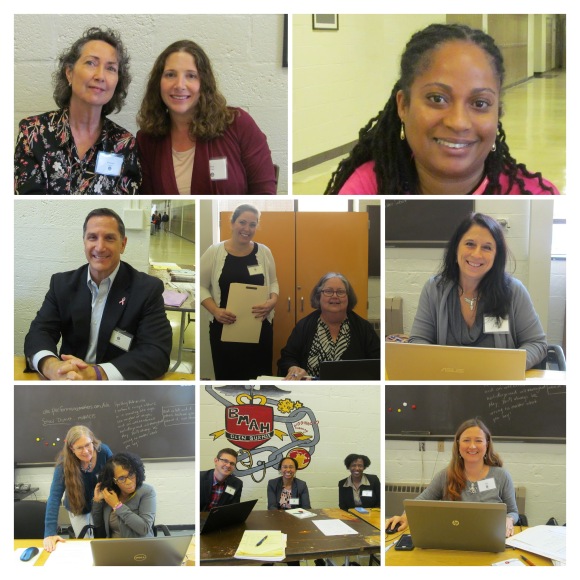 With the changes to the expungement law on October 1, we are especially grateful for access to the MVLS webinar on expungment presented by Matthew Stubenberg.

Laurie Culkin and Maxine Roberts at the MVLS table were able to provide guests with information about MVLS services and had 8 family law intakes for representation.

Swapna Veluri of HPRP with volunteer attorneys Jeremy Anderson, Martha Voorhees and Kate Bunker were on hand to provide assistance to veterans.  This year there were only 17 guests who were veterans.

To see the full legal statistics, check out the wiki page.

Thirteen people were helped with legal issues including expungement (the #1 question), family law, criminal and housing.  It was a bit challenging once it was discovered that the Maryland Judiciary’s Casesearch was out for the weekend making it so attorneys could not review criminal records online.  Legal Aid was able to provide intake so that the cases could be reviewed later in the office and the clients advised then.

A Free Legal Fair and Expungement Clinic will be held Saturday, October 14, 2017 from 10 a.m. to 2:00 p.m. at the Boys and Girls Club at Freetown Village. (7820 Darrell Henry, Pasadena, Maryland 21122) The Fair will be held in partnership with AACO NAACP and the AACO Local Pro Bono Committee. It is a Zeta Phi Beta Sorority, Inc. – Rho Eta Zeta Chapter Event.

More information on expungement can be found on the library’s expungment wiki page. Here you can find links to the law, information pages and even videos. There are listings of other expungement clinics held in the area as well. 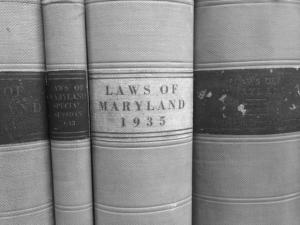 New Maryland laws take effect on October 1, 2017!  We will be publishing a series of posts highlighting a few of the newly enacted laws.  This series is just a small sampling of the new laws enacted by the 2017 Legislative Session.  To read about more laws resulting from the 2017 session, see the 90 Day Report – A Review of the 2017 Session published by the Department of Legislative Services (DLS) of the General Assembly of Maryland. For a full listing of new laws effective October 1, 2017, check out this publication from DLS.

Now Maryland law (codified in section 10-110 of the Criminal Procedure Article) allows for expungement of more misdemeanor convictions after a certain period of time.  WIth changes, the Maryland Volunteer Lawyers Service (MVLS) offered a webinar on expungement that covered the new and old expungement law.  Matthew Stubenberg, creator of the MDexpungement app, was the presenter.  The presentation, JRA Expungements,  is online and the full webinar will be available soon. MVLS has also posted a list online that details which offenses are eligible for expungement  under the JRA:  All Convictions Eligible Under the JRA.

New expungement forms will be made available October 1 – one for non-guilty records and one for guilty.  You can view them online now but they are not ready for use. Per Matthew:

CC-DC-CR-072 A should be used for the expungement of acquittal, dismissal, probation before judgment, nolle pros, stet, and certain not criminally responsible dispositions. There will be no filing fee for these dispositions.

MVLS has provided this training to those who are interested and hope those who do will volunteer by taking a case  OR taking part in an expungement clinic.

Volunteer attorneys are also needed to help with expungement at the  Anne Arundel County Homeless Resource Day which is scheduled for October 28, 2017.

Note that all quotations, unless noted otherwise, are attributable to the 90 Day Report – A Review of the 2016 Session published by the Department of Legislative Services of the General Assembly of Maryland.

in two volunteer attorneys,  Jennifer L. Wazenski and David Mitchell,  who were able to help 4 people to determine if their charges could be removed from their record and prepare the paperwork if they were. (A fifth person had a question about a Virginia criminal charge.  We were able to direct her to information for Virginia at VALegalAid.org.)

Matthew Stubenberg, provided a training review in the use of the expungement app, MDexpungement.com, that he developed.  This app makes filling out the forms so much easier than filling them out by hand or typing in the required information, especially when there is more than one charge.  With the app the case number is entered and the program will report if the charge is expungeable.  If it is, the information will have been pulled from Maryland Case Search for review and edit.  It will then generate the form for filing.

This a valuable program as criminal record can be a barrier to employment and housing.  Having charges removed from a criminal record and case search can make a big difference in someone’s life.

For more information on expungement in Maryland please visit the law library’s wiki page @ http://aacpll.pbworks.com/w/page/40922164/Expungement  where you can also find links to other expungement clinics sponsored by MVLS and Legal Aid.

The Ask A Lawyer In The Library program is a civil, non-family law, self-help program sponsored by The Anne Arundel Bar Association and the Maryland Volunteer Lawyers Service. Every Wednesday, from 11:00 a.m. to 1:00 p.m., you can talk with a volunteer attorney for up to 20 minutes. No appointment is necessary, but sign-up is required at the law library’s information desk. Sign-up begins at 10:45 a.m., and time slots are determined by a lottery. In addition to the weekly program, the Ask A Lawyer In The Library program is held monthly at two Anne Arundel County Public Library branches: Glen Burnie Regional Library on the 3rd Wednesday and Eastport-Annapolis Neck Community Library on the last Tuesday. For more information, please see http://circuitcourt.org/legal-help/lawyer-in-the-library.

On Wednesday, April 12, the Law Library hosted another successful Ask A Lawyer In The

Library program. Thank you, Chris Boucher, for volunteering and providing this service to the public. Six people took part in the program and were able to speak with the attorney to request assistance with issues such as access to medical recourds, bankruptcy, apeals and foreclosure. The next program date is Wednesday, April 19, 2017 – in the law library and at the Glen Burnie Regional Law Library.

There will be an Expungement Clinic sponsored by MVLS at the Eastport- Annapolis Neck Community Library next Monday, April 17 from 6:00 pm until 9:00 pm. (More information on expungement can be found on the library’s FAQs wiki page under “expungement.” )

The Maryland Volunteer Lawyers Service (MVLS) sponsored an Expungement Clinic at the Glen Burnie Regional Library on Wednesday, March 29, 2017, in the evening from 5:00 p.m. until 8:45 p.m.  There were 5 volunteer attorneys who were able to help 19 people complete expungement petitions for filing.  Matthew Stubenberg of MVLS coordinated the program. Matthew is known for developing MDexpungement.com, an APP that can determine if a case is eligible for expungement and then populate the form with the information needed for filing.

More information on expungement can be found on the library’s FAQs wiki page under “expungement.”  The page provides access to the Judiciary’s Access to Justice Department’s self-help video on expungement with tip sheet, articles on the Maryland People’s Law Library of Maryland, and the brochure published by the District Court of Maryland “Information About Removing Criminal Records from Public Access in Maryland” and many more resources.

The referral section contains links to clinics and APPS that can help with expungement of criminal records.

An additional Expungement Clinic will be held at the Eastport Annapolis-Neck Community Library next Monday on April 17, 2017 beginning at 6:00 p.m.